What are the Top Ten Poisons? 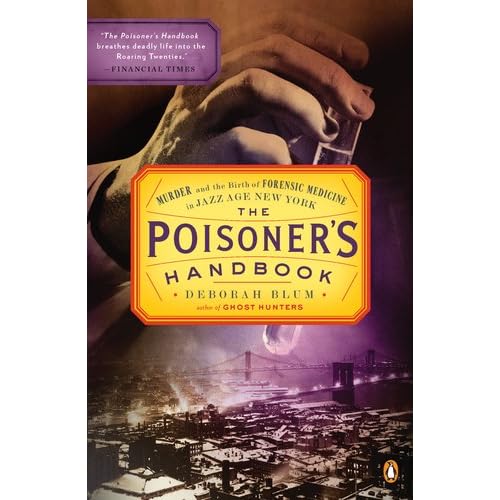 The following are author Deborah Blum's Top Ten.  For an entertaining account of how various poisons work, check out her book The Poisoner's Handbook: Murder and the Birth of Forensic Medicine in Jazz Age New York

On a recent radio show, I heard myself telling the host "And carbon monoxide is such a good poison.” We both started laughing--there’s just something about a Pulitzer-prize winning journalist waxing enthusiastic about something so lethal. But then he became curious--“Why?” he asked. “Why do you like it so much?”

These days, as I travel the country talking about The Poisoner’s Handbook, I’m frequently asked that question or variations on it. What’s your favorite poison? What’s the perfect poison? The answer to the latter is that it doesn’t exist--except in the plots of crime novels.

But in reality, poisons really are fascinatingly wicked chemical compounds and many of them have fascinating histories as well. Just between us, then, here’s a list of my personal favorites.

1. Carbon Monoxide (really)--It’s so beautifully simple (just two atoms--one of carbon, one of oxygen) and so amazingly efficient a killer. There’s a story I tell in the book about a murder syndicate trying to kill an amazingly resilient victim. They try everything from serving him poison alcohol to running over him with a car. But in the end, it’s carbon monoxide that does him in.

2. Arsenic--This used to be the murderer’s poison of poisons, so commonly used in the early 19th century that it was nicknamed “the inheritance powder”. It’s also the first poison that forensic scientists really figured out how to detect in a corpse. And it stays in the body for centuries, which is why we keep digging up historic figures like Napoleon or U.S. President Zachary Taylor to check their remains for poison.

3. Radium--I love the fact that this rare radioactive element used to be considered good for your health. It was mixed into medicines, face creams, health drinks in the 1920s. People thought of it like a tiny glowing sun that would give them its power. Boy, were they wrong. The two scientists in my book, Charles Norris and Alexander Gettler, proved in 1928 that the bones of people exposed to radium became radioactive--and stayed that way for years.

4. Nicotine--This was the first plant poison that scientists learned to detect in a human body. Just an incredible case in which a French aristocrat and her husband decided to kill her brother for money. They actually stewed up tobacco leaves in a barn to brew a nicotine potion. And their amateur chemical experiments inspired a very determined professional chemist to hunt them down.

5. Chloroform--Developed for surgical anesthesia in the 19th century, this rapidly became a favorite tool of home invasion robbers. If you read newspapers around the turn of the 20th century, they’re full of accounts of people who answered a knock on the door, only to be knocked out by a chloroform soaked rag. One woman woke up to find her hair shaved off--undoubtedly sold for the lucrative wig trade.

6. Mercury--In its pure state, mercury appears as a bright silver liquid, which scatters into shiny droplets when touched. No wonder it’s nicknamed quicksilver. People used to drink it as a medicine more than 100 years ago. No, they didn’t drop dead. Those silvery balls just slid right through them. Mercury is much more poisonous if it’s mixed with other chemicals and can be absorbed by the body directly. That’s why methylmercury in fish turns out to be so risky a contaminant.

7. Cyanide--One of the most famous of the homicidal poisons and--in my opinion--not a particularly good choice. Yes, it’s amazingly lethal--a teaspoon of the pure stuff can kill in a few minutes. But it’s a violent and obvious death. In early March, in fact, an Ohio doctor was convicted of murder for putting cyanide in his wife’s vitamin supplements.

8. Aconite--A heart-stoppingly deadly natural poison. It forms in ornamental plants that include the blue-flowering monkshood. The ancient Greeks called it “the queen of poisons” and considered it so evil that they believed that it derived from the saliva of Cerberus, the three-headed dog guarding the gates of hell.

9. Silver--Swallowing silver nitrate probably won’t kill you but if you do it long enough it will turn you blue. One of my favorite stories (involving a silver bullet) concerns the Famous Blue Man of Barnum and Bailey’s Circus who was analyzed by one of the heroes of my book, Alexander Gettler.

10. Thallium--Agatha Christie put this poison at the heart of one of her creepiest mysteries, The Pale Horse, and I looked at it terms of a murdered family in real life. An element discovered in the 19th century, it’s a perfect homicidal poison--tasteless and odorless--except for one obvious giveaway--the victim’s hair falls out as a result of the poisoning!

Now that I’ve written this list, I realize I could probably name ten more. But I don’t want to scare you.
Posted by Jimmy at 10:46